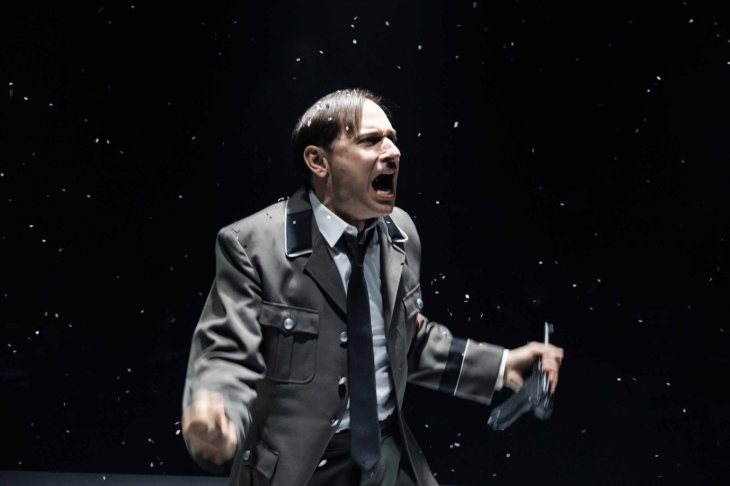 In a world premier, Justin Fleming connects Adolf Hitler and Richard Wagner across time through a love of art and opera. Asking the tough questions about want, creation, and responsibility, DRESDEN seeks to complicate the way we interpret both small moments and their influence on the large names of our history.

The action opens with Richard Wagner (Jeremy Waters) and Cosmia (Renee Lim), his wife, writing his recollections of his early career and his first successful music drama, Rienzi. They bounce in and out of his memories before flashing forward to another famous man and his personal relationship to this work: Adolf Hitler. After Adolf’s infatuation with the performance, he attempts his own artistic career with friend Gustl and so begins the history. These two men’s lives and rise in their career and fame following Rienzi run parallel in this production until the final confrontation that drags up underlying questions of want and the responsibility the artist has towards their audience.

Waters plays a lively and engaging Wagner with a real talent for listening and responding to his fellow actors. His ease of shifting between narrator and player in his story and the fantasies of Adolf’s are charming and appear genuinely spontaneous, a man caught in the joys of his memories. Yalin Ozucelik as Adolf and Ben Wood as Gustl are similarly enjoyable to watch as friends and partners debating the influence of passion and love on their lives. Not infrequently, the camaraderie between the men attempts casual comedy that most often came off as odd and silly, making Adolf appear a petulant child, inappropriate to the context of the story. However, Ozucelik and Wood are strong in their representation of growth and strain in the relationship between these men as they pull apart over time.

The core question of this production is the symbiotic relationship between art and the world and how seemingly small incidents in each can spiral into much larger consequences. The responsibility an artist has for the reception and influence of their art is a complicated but necessary concern to be discussed by artists with each other and their audiences. There is no easy solution and so the conversation continues. The point at which DRESDEN appears to lose focus on the discussion is in the choice to apply this compelling argument to the extreme and cliched biography of Adolf Hitler. Is the hypothetical of Hitler’s artistic ambition a question worth interrogating when the words, actions, and alliances of our current political leaders indicate that fascism and xenophobia are alive and well in the modern formation of our art and culture? To tell this specific intermingling of politics and art seems a straining towards relevance by ham-fistedly using what many Westerners consider the ultimate moral failing in an attempt at shock and powerful storytelling.

Similarly, the shining set and boldly colour lighting design chose intensity and dramatics to examine the movements between action and thought, reality and fantasy. Grand moments of performance, whether Wagner’s music or Hitler’s speeches, were presented as equally enormous in their resonance and red and gold lighting. It wasn’t until the fires of Dresden, where ash fell on a cool stage that the subtly possible in the design was fully demonstrated. Before the stilted testimonies and fantastical confrontations, the ash in the air was beautiful.

The final scene, where Fleming imagines Wagner confronting Hitler about his misinterpretation of Rienzi, is the ultimate in dramatic indulgence. To have a war criminal argue his justification for genocide with his long dead musical hero was heavy-handed and unnecessary for capturing the complications at play between the two men. And, finally because it needs to be said: suicide is not a dramatic device. It is not a powerful final image, not a crescendo. It is a tragedy that is trivialised enough without being used to instil the last moment of sympathy or a cheap thrill in an audience. To do so it callous and a disservice to the humanity of your characters.

DRESDEN is playing at the Kings Cross Theatre from June 20th – 30th.