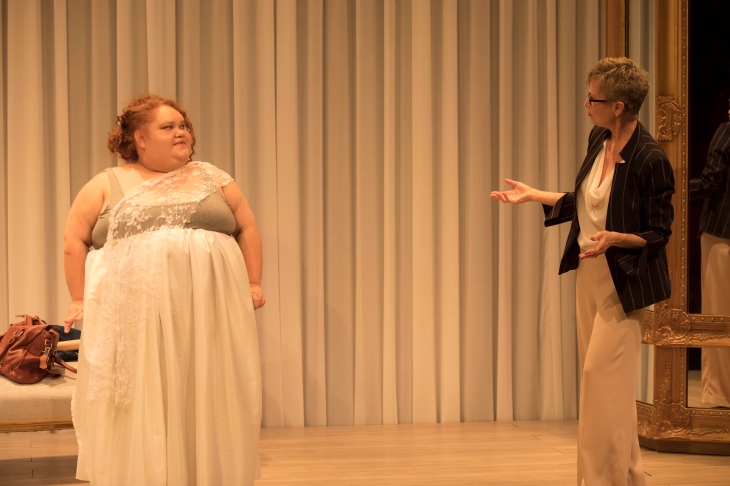 Weddings as moments of great personal and cultural significance are often very emotional experiences from the engagement to the bachelor/bachelorette parties and all the little rituals that go into the big day. For marginalised people, people who are not reflected in bridal magazines or represented in bridal shops, and who don’t even appear in trashy wedding reality shows, organising a wedding can encompass an additional range of emotions that damper the joy and frivolity of the occasion. Alana Valentine’s new play Made to Measure confronts the experience of trying to celebrate yourself in a world that won’t celebrate with you.

Ashleigh (Megan Wilding) has always been fat which means she’s had a lifetime of swallowing fatphobia and trying to love and value herself anyway. Now she’s getting married to a wonderful guy named Bryce (Sam O’Sullivan) and she has to face the tag-team diet and wedding industries to reach her happily ever after. After being turned down from a number of wedding dress makers, Ashleigh stumbles upon Monica (Tracy Mann) who agrees to make her a dress no matter her size. But, as many fat people will know, it’s never that simple. So, when Monica gets talking about all the happy and unhappy weight loss stories she’s encountered with all manner of brides, the subtle, insidious hatred of fatness leaks out.

The depiction of fatphobia in Made to Measure operates in two ways: how the world talks to Ashleigh and how Ashleigh has internalised those messages to say even crueler things to herself. The script foregrounds the misconception that fatness and weight gain are indicative of a lack of care about one’s body when, in fact, for fat people, their body forms the centre of nearly every aspect of their life from doctors appointments to navigating public transport to fielding “advice” from strangers to getting dressed every morning. In this story, the harm caused by generalised hatred of fat people and targeted hatred from the diet, fashion, hospitality, and medical industries are crystallised in the supposedly joyous occasion of buying a wedding dress.

Monica and Ashleigh’s relationship is a treacherous one as its grounded on a client/couturier basis and revolves around a sale. Though, commodity culture theory will assert that Ashleigh is buying a lot more than just a dress: she’s buying expectations, a feeling, a memory, desire and hope and joy all mixed into one garment. This necessitates a deeper and more sophisticated relationship of intimacy and vulnerability between Ashleigh and Monica but this again remains fraught with the failure to acknowledge wider cultural and social contexts of Ashleigh’s body. In the few yelling matches Ashleigh gets into over the course of the show, she is fighting for her dignity and humanity, for kindness and recognition but in Monica’s tragic private life, the universe seems to be asking: what will it take for people to listen?

The complexity of Ashleigh’s characterisation is astounding not only because it is a rare moment of fat representation but because her feelings about herself are complicated and they interact in a myriad of ways with her perspective of the world and her relationships. Wilding is cheeky and charming with a sense of self that reflects the trials and tribulations of living as a marginalised body. Both her anger in defence of her body and her vulnerability when looking for acceptance are equally powerful. It takes a particular kind of performance talent to confidently play a self-conscious and timid character and Wilding has nailed the nervous giggle. Even as Ashleigh wavers in her convictions, Wilding plays her with a compassion and warmth that makes her irresistible.

Against her sparring partner, Mann: Mann is sharp as Wilding is soft and Wilding hard as Mann is shallow. Monica’s righteous, flabbergasted fear compresses against Ashleigh’s self-awareness to find a still somewhat foggy peace between the two.

Valentine’s script hangs on a very specific story and Tim Jones’s direction works well to create a cacoon around the events that makes it feel cushioned, rather than isolated. Real or imagined food delivery men and personal trainers (all played by O’Sullivan) enter the space but through Ashleigh’s mind while Monica invites other examples of blushing brides and failed relationships in through her winding anecdotes. It isn’t so much that the wedding dress shop forms an oasis so much as it is a microcosm for the heightened emotions of the everyday world.

The set design from Melanie Liertz, all sheer curtains and ornate sofas is pretty like hyper-feminine spaces typically are. The row of bridal mannequins lit from behind foreshadow with their shadowy hourglass silhouettes. In moments of high drama and distress, Verity Hampson’s lighting design dips into the otherworldly, polluting the pretty space with washes of green and blue. It’s in these moments that the realism of Ashleigh’s experience tilts into something more sinister but, at the same time, no less recognisable.

In popular media, fat women are laughing stocks (a la Melissa McCarthy in Bridesmaids) or the villains (Jillian Bell in Rough Night) or they’re not really fat at all (Gwyneth Paltrow in Shallow Hal). Fat people in general are bodies in transition (Debby Ryan in Insatiable) or they’re failures (Chris Hemsworth in Endgame). So media representation of fat people has come to mean the restimagisation of their bodies and the perpetuation of cruel and dehumanising attitudes. In Made to Measure, Jones tells another story of love, respect, and genuine happiness for a fat women. Watching Wilding and O’Sullivan as giddy, gentle, familiar fiancés was simple but revolutionary. Representation matters for changing attitudes and policy towards marginalised people but on another level, it is restorative to see a different prophecy for your life on stage.

The responsibility to solve the “obesity epidemic” has been placed squarely on the shoulders of fat people to carry on their own but Made to Measure illustrates the nuances of fatness and points to a path away from hatred that prioritises involved and compassionate communication amongst everyone. While fatphobia remains one of the last acceptable forms of discrimination, works like this are doing the hard yards towards kindness and peace for fat people.