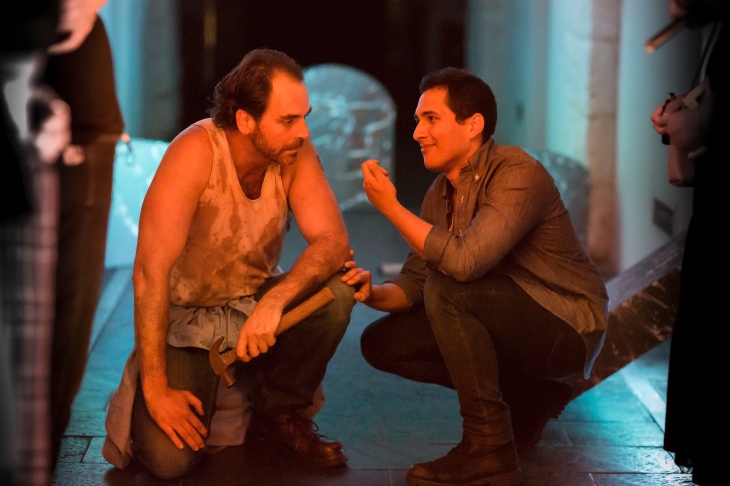 For the second instalment of DEADHOUSE: Tales of Sydney Morgue’s second season, Actors Anonymous and Blancmange Productions bring to light a classic story of the Australian bloke. Kevin Simmonds and Leslie Newcombe were underdogs whose petty crimes and dangerous mistakes set them on the run.

Writer and director Liviu Monsted explains his interest in Simmonds (Chris Miller) and Newcombe (Jordan Gallegos) as an investment in their fight for freedom. Their escape from Long Bay Gaol started the longest manhunt in New South Wales history with police searching for over five weeks to find Simmonds. Both men had histories of robbery and petty crimes that put them in and out of children’s homes and prisons for much of their young lives but it wasn’t until their desperate escape in 1959, which saw them bludgeon to death a guard at Emu Plains Prison Farm, that their experiences became known to the wider public.

Much like their previous production, Louisa Collins: A Poison Crown, Simmonds & Newcombe investigates the history of law and reform in Sydney with an eye towards the consequences of miscarriages of justice. When the two men were finally captured, they were sentenced to imprisonment at Grafton Gaol, one of the most notorious prisons for brutality and inmate mistreatment. At this point Simmonds especially had garnered a lot of public sympathy from fans and libertarians like Grace (Wendi Lanham). Their sentencing drew a lot of attention to the conditions in Grafton Gaol which eventually led to great prison reforms in the 1970s.

Monsted’s production in the crypt of St James’ Church recreates the physicality of being on the run with cramped quarters and a sticky heat hanging over the action. Kyla Ward as Detective Merchant, in charge of finally finding Simmonds and Newcombe, leads the audience through scenes of support in typical Sydney households, moments of despair as the men starve in hiding, and the impact of their eventual capture. The story progresses rapidly as the police and escapees continually try to outstep the other. Simmonds grows particularly desperate in an encounter with two men (Christopher Daw and Steven Maresca) while attempting to survive in bush lands where he steals their ute in a wild craze.

In the final scenes, Gallegos monologues as Newcombe, attempting to explain the experience of living in Grafton Gaol surrounded by fear and cruelty. Here the action of the previous scenes slows to a more pensive and resigned tone indicative of the man’s changed circumstances. The production does well to balance Simmonds and Newcombe’s crimes against a vindictive justice system with no interest in or understanding of rehabilitation or crime prevention but it’s in these last moments of Newcombe’s direct address that the historical representation slips into over-sentimentality and becomes a bit too hammy.

DEADHOUSE: Tales of Sydney Morgue is an engaging and inventive way to explore the history of Sydney as a representation of changing times and attitudes in Australia. By bringing forward forgotten names from the past, DEADHOUSE reminds us of the real lives invested in policy and reform now taken for granted.

Simmonds & Newcombe: The Deadly Run is running at the Crypt of St James’ Church from November 20th – 30th