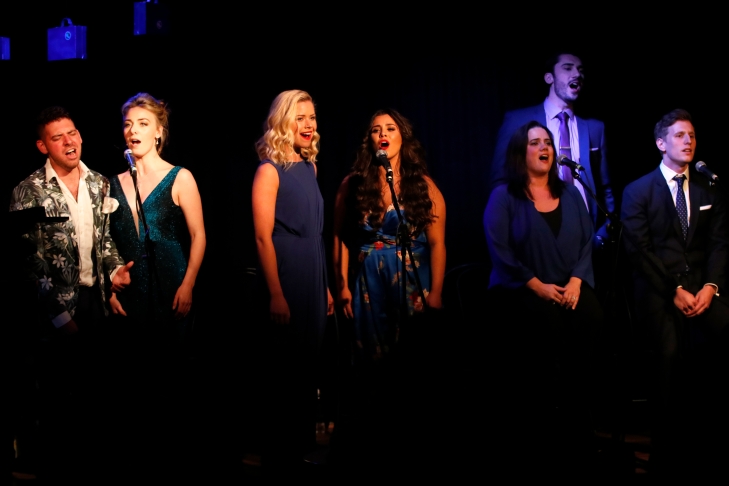 The team behind Little Triangle are at it again, bringing forgotten musical theatre gems back to the stage for a new audience. This time, instead of a single show, there are a lot of little bits plucked from their narrative context and woven into A Little Cabaret.

Featuring songs from classic productions such as Fiddler on the Roof and Nine, and from less familiar titles like Natasha, Pierre & the Great Comet of 1812, this production boasts an expertly curated selection of musical theatre numbers that sweep up and down the emotion spectrum. Starting with an odd description of sneaking into a department store overnight to spite his neighbours, Aaron Robuck establishes a quirky atmosphere early on, while, the following harmony, “Overture Delle Donne”, sung by the four women of the group (Embla Bishop, Siobhan Clifford, Denise Devlin, Olivia Vasquez), was beautiful and equally quickly set expectations high.

Stand out songs throughout the night included “Just One Step”, where Devlin truly became a spurned New Yorker wife, “When Your Mind’s Made Up” which brought the performers together to tug hard on the audience’s heartstrings, and “On the Verge” that was very funny and light-hearted. Also worth mentioning is Jesse Layt’s powerful rendition of “Dust and Ashes”, it was genuinely moving to watch him grapple with the pain of living. But, honestly, all of the songs shone for the skill with which they were performed by each singer.

What crucially made this performance not merely an hour and a half of cabaret songs, was how each singer put as much energy into their singing as their acting; they embodied their characters in excellent homage to the original context of each song. This is what separates good singers from excellent performers and it’s what keeps people coming back to musicals again and again. It also helps to have an Olympic athlete of an accompanist in Conrad Hamill.

Little Triangle sets the standard for musical theatre very high. Where every aspect of a production is carefully considered from the props, to the lighting design (Christopher Starnawski), to staging the cast’s seats, nothing about the audience experience isn’t accounted for. This production was as smooth as silk in its transitions but still free and fun when the song called for a dance break. You can tell how good a show is when the cast on the sidelines are as engrossed in their peers’ performances as the audience. A Little Cabaret was a pleasure of an evening to spend with the work of such talented cast and creatives.

A Little Cabaret is running in the Seymour Centre Sound Lounge from September 20th – 22nd.