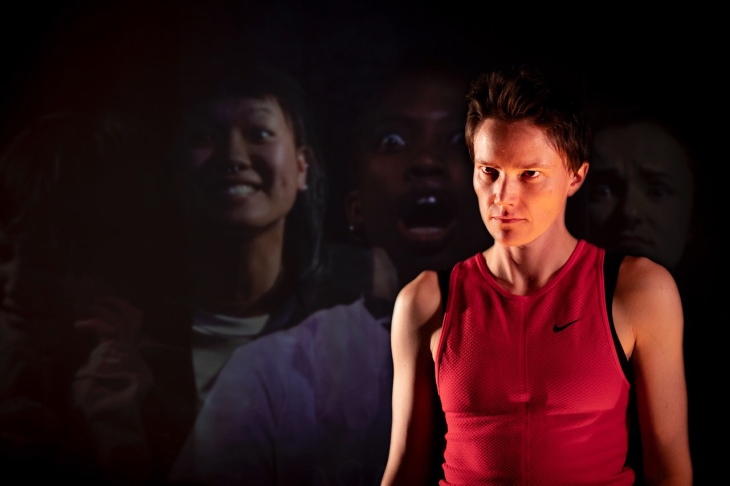 Agamemnon is a rock goddess on an international tour to grow her fame like never before. But she has a complicated family past that her detractors bandy about at the least provocation; spreading rumours that tarnish her unbelievable success. In Ang Collin’s reimagining of the Greek tragedy, the limitations of loyalty are tested in a mother’s struggle for selfhood.

On stage, Sophie (Ella Prince) is Agamemnon: an untouchable musical genius with the audience eating out of her carefully controlled hand. After having to cancel her previous tour, this opportunity feels like a miracle and she’s taking advantage of her chance to reinvent herself, including beginning a new relationship with Instagram influencer and horoscope guru Cass (Chemon Theys). But, on the final night of the tour, Sophie must return to the humble earth and fulfil a promise to herself: re-submerging into her past life with her ex-partner Chris (Jack Crumlin), and choosing to turn away for the last time.

Collins’s script structures the narrative through alternating modes and perspectives that move within and without the action. At times, the chorus (Crumlin, Theys, Madelaine Osborn, Nicole Pingon, Eliza Scott) are Agamemnon fans, discussing conspiracy theories and lyrical themes from a distance like followers on dedicated forums, while, at other times, the chorus is in a more privileged position as narrators to the drama of Sophie’s life, perhaps with more knowledge than they care to share. As a group, they subtly occupy the air of the production whether crowding as projections on the back wall, calling across the audience from stairways, or stepping directly onto the stage and taking more active measures.

With the chorus shaping the structure of each scene, the production seems to circle around Agamemnon, keeping her at slight remove. Quite literally she is centred in Emma White’s set design, elevated on a glossy black cylindrical plinth which isolates her like a displayed figurine or, less nostalgically, like a hologram. Prince’s physicality is fittingly statuesque throughout, confident and powerful which sometimes seems cold or stilted in comparison to the soft, human quality of Crumlin as Chris.

Prince is an enigmatic performer who deftly slides through the emotional spectrum for captivating and unusual portrayals. Crumlin’s performance offers an alternate vulnerability and pitiable frailty that bounces well off Theys’s proud Cass. From the chorus, Scott was a crowd favourite as an often overly-enthusiastic and charming characterisation.

The contrast between the glamour of tour life and the run-down real world crystallises the pain of Chris and Sophie’s circumstances. After a high school romance, they had a child called Gene who was sickly from the start and placed enormous strain on their relationship until he died shortly before Sophie’s tour. Where Gene’s death broke Chris and put a stop to his life plans, Sophie was freed to pursue a dream she had always harboured, one that paid off in the extreme. From this disparity, Collins’s script and Clemence Williams’s direction draws the tension of the narrative, conjuring consideration of loyalty, freedom, fairness, and care. What role did Sophie’s desire for escape play in her son’s death? Which grief is the right kind? Who’s the monster of this story?

Rewriting Agamemnon as a woman immediately complicates the sympathy for her actions through sexist biases and social expectations reserved for women and mothers. Her gender invokes ideals of nurturing motherhood, self-sacrifice, and loyalty to her children above all else; expectations Sophie resists until the end. This gender-role reversal highlights insidious inequalities and dark attitudes that bubble below our social fabric, influencing more decisions than one may care to admit.

The production of Chorus is complex, integrating a dynamic lighting and sound design from Veronique Bennett and Williams respectively, with a sleek set and multi-media components. With three video cameras on stage, video designer Sarah Hadley moves the audience gaze into uncharted stage territory; in some instances getting viscerally close to the action and other times overlaying images in projection for a more mystical tone. Williams skilfully orchestrates the many elements for a potent atmospheric experience that engages the far-reaching possibilities of live performance storytelling. There’s also a playful attention to the details of this world, allowing Agamemnon’s famous persona to haunt every moment, the chorus wear tour tees in a nod to their complicity.

The world-premiere of this reimagined tragedy is a concentrated act of resistance to patriarchal expectations for women characters that cleverly mixes old and new modes and mediums for something special.