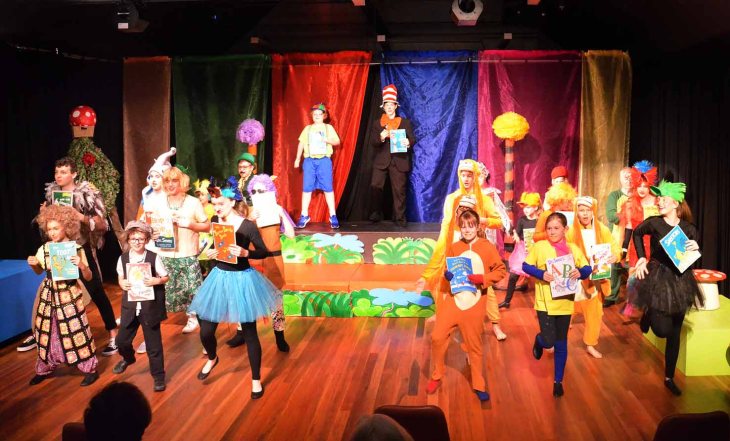 Closing out their 2018 season, the Lane Cove Theatre Company brought the world of Dr Seuss to the stage for a fun-filled production appealing to kids and adults alike. The most beloved childhood characters of the Cat in the Hat, Horton, the Grinch, Yertle the Turtle, and all their friends are brought alive for a musical extravaganza.

The majority of the action follows Horton (Josie Segal) and his tiny, tiny Who friends who we must protect at all costs. The story is largely a silly and charming tale about belonging and friendship but the parents in the audience will also appreciate the darker turns of the narrative including animal slavery, mental health hospitals, and the threat of death by boiling. It may be a story about an elephant and his sentient specks of dust, but it has a serious side that settles with audiences in quieter numbers. Everyone’s favourite Cat in the Hat (Jeremy Segal) narrates the production and springs into the scene whenever a voice of reason (or unreason) needs to be heard.

The set design from Trent Gardiner was simple in execution but very well suited to the production. Large swathes of sheer fabric hung from the ceiling created a backdrop reminiscent of a carnival or circus performance and allowed for the background to be back-lit with fairy lights for a more magical atmosphere. Other design elements demonstrated a creative approach to problem solving, for example, how to best depict an elephant up a tree, sitting on a nest. Costume design, also from Gardiner with Rose Edwards, was clever as well as appearing wonderfully homemade, especially the costumes of Gertrude (Leah Francis) and Mayzie (Madeleine Biddle) with their bird chorus (Eve Emeleus, Valeria Gonzalez Lopez, Holly Miller, and Charlotte Pugh). Everything was bright, colourful, and very clearly conveyed the world of Dr Seuss’s characters on stage.

Some characters are big and bold, like the Cat in the Hat or Mayzie, and some characters are quieter and more reserved like Gertrude and Jojo (Hugo Allen). Their energies balance each other out as everyone does their best to fit in and stay true to themselves at the same time. A performance of particular note was Josie Segal and Hugo Allen’s duet as creatures in a wide big universe finding a reflection of themselves in each other.

Seussical Jr is a feel-good, family production put together to bring joy and silliness to a community in the lead-up to the holiday season.