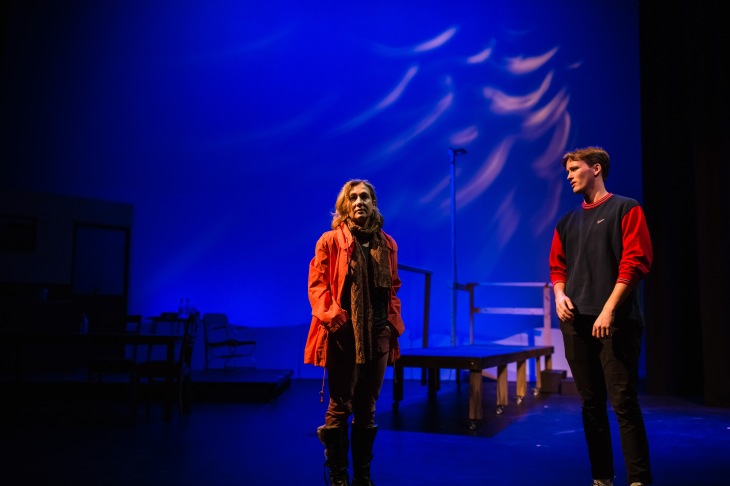 Three sisters’ lives recollide after middle sister Meg’s novel is nominated for the Book Prize. With the death of their father and the questioning of Hilary’s son Troy, the sisters are forced to re-examine the life they lived in hometown Sorrento and what drove them apart. This is a piece of nostalgic Australiana from our recent history that attempts to unpack the Australian identity in a global culture.

HIT Productions’s revival of the Australian hit drama Hotel Sorrento marks nearly 30 years since Hannie Rayson’s play debuted. The original production was award-winning and inspired a 1995 movie by the same name. It’s clear how well-received this script was back in the 90s, but for a 2018 audience and amongst a 21st century cultural landscape, Hotel Sorrento‘s concerns are simply out-dated. It begins with the argument about difference and isolation experienced by Australia on the outskirts of the global discourse that shrinks “international” opinion to just England and the United States. Ex-patriat Meg’s (Kim Denman) rant about the prejudice she experiences as an Australian in England is demonstrative of how insular this conception of the world is where only the loud, English-speaking countries matter. When the make-up of Australia’s population is more diverse culturally, ethnically, and religiously than ever before, to centre conversations about the “Australian cultural renaissance” in terms of its relation to England is irrelevant and out of touch.

Including the laborious conversations about Australia’s national identity discussed over the dinner table, all of the politics of this production appear shoe-horned and forced in a stretch to throw the net a little wider and engage with the global discourse of the 1990s. Marge (Jenny Beedsman) and best friend Dick (Mike Smith) regularly circle back to discussions about the differences between the sexes and the gender politics of their political circles in a way that blunders past any nuance and appears more as an attempt at provocation than any genuine negotiation. Rayson is clutching at straws to include the small town of Sorrento in a wider cultural and political discussion but fails to provide the subtlety necessary to shape a character’s personal perspective realistically and complexly.

Sorrento is a small town and the short vignettes that make up the script are a representation of the slow and gentle way of life for those in this coastal town. Adrienne Chisolm’s three-part set design further emphasises the parcelling of scenes that the lighting design, by Shane Grant, with partitioned warm washes and black-outs between every scene, separates even more. When a script’s pacing is slow already, to slow the action down even further in both space and time leads the production towards stagnation and boredom. Watching every scene get set up and taken down between washes is unimaginative and amateur.

Other directorial choices, such the use of soap opera-esque background music and hammy conversation style, draw unflattering attention to the didactic nature of this production. Many, many scenes included sweeping statements about life, love, melancholy, or loyalty (to name some themes) that were projected into the audience as little morsels of wisdom to take home and savour. In every meaningful look or silent slow-fade, the audience is reminded that this production is moving and insightful. Nevermind the frequency with which characters assert what the others are thinking or feeling and then attack them with no need for actual conversation. This production is quite literally engaged with explaining its own metaphors and symbols so there’s no room for complexity or nuance in its steady movement towards the cliched reveal of each sister’s lover.

Dennis Coard, playing the patriarch Wal Moynihan, is a touch of comic relief who acts with a genuine ease on stage. It’s a real shame his larrikinism is only around for the first half. Similarly, Dion Mills as Pom Edwin Bates is appropriately dry and stiff when transported into coastal Victoria.

Three sisters are forced to look at themselves and each other for what seems like the first time in an attempt to examine Australian identity more widely but, if 10 years is long enough to lose touch, 30 years is more than enough for Hotel Sorrento to lose its edge.