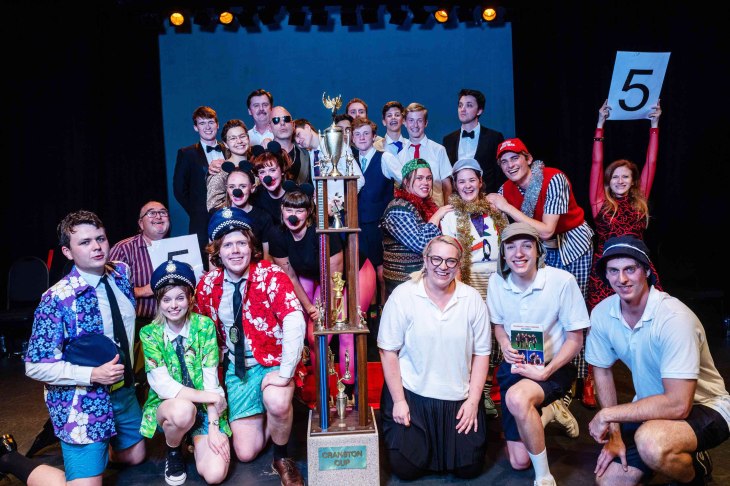 As another year comes to a close, Impro Australia gathers the best of the best theatresports teams from around Sydney to compete for the prized Cranston Cup in four rounds of improvised fun and theatrics. Hosted by Cranston Cup winning duo Mantaur, Harry Milas and Rob Johnson, the competition promised to celebrate the weird, the wonderful, and the entirely made up.

This year featured another wide range of talented improvisers including two of winners from the 2018 Cranston Cup: Rachael Colquhoun-Fairweather in the Pash Rats, with Alison Cooper and Ruby Blinkhorn, and Elliot Ulm in the James Hill High U13B Reserves, a team comprised of Newington College theatresports coaches with Reuben Ward and Tamara Smith as well. A group of year 9 and 10 students from Newington College as Year 6 Formal represented the youngest competitors while veterans Jon Williams, Kath Thomas, and David Callan performed as The Bald & the Beautiful.

Over four rounds the teams must navigate changing time restrictions, challenges from other teams and the hosts, and the limits of their imaginations to win the favour of the judges Kate Coates, Liz Hovey, and Wean Campbell with their deft control of theatresports games. To aid their seamless narrative construction all teams are accompanied with the improvised musical stylings of Tom Cardy on keyboard.

Early on James Hill High U13B Reserves charmed the crowd with their shy and anxious characterisations between scenes but they faced stiff competition from We’re Cousins Kate Wilkins, Isabella Pinson, and Campbell Taylor who demonstrated a similar commitment to the bit. Stand-out scenes from these teams including Ulm as a deranged Swamp King and Wilkins as an agoraphobic firefighter on a mission to save the Amazon Rainforest. Other crowd favourites saw wholesome snowmobile constructions from the Pash Rats and the Bald & the Beautiful living up to their soap opera name with a dramatic property dispute.

In the end, the quirky style of One Day til Retirement (Steph Ryan, Luke Tisher, Theo Murray) and the consistency of James Hill High U13B Reserves saw them as the rare joint winners of the Cranston Cup 2019, quickly followed by the inventive We’re Cousins in third place.

Whether constructing elaborate dog/human/alien racing conspiracies or negotiating working conditions with your magic rabbit assistant at gunpoint, the Cranston Cup is an unpredictable experience with some of Sydney’s wildest and most creative improvising talents.