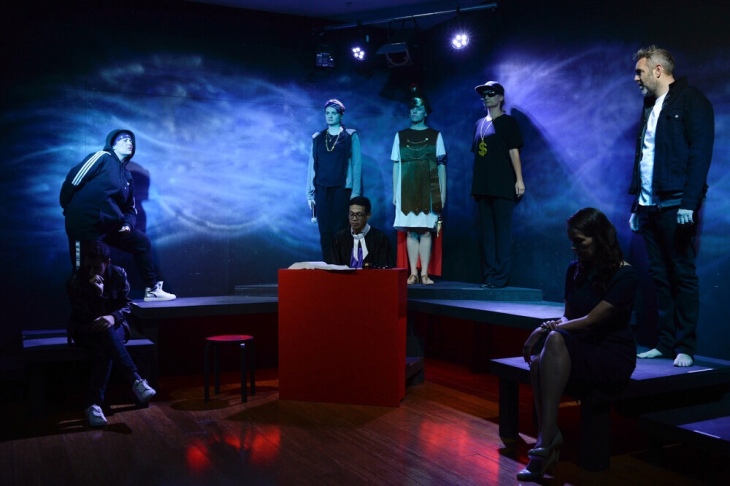 Judas, the original betrayer, the man who sold Jesus out to the Romans for 30 silver pieces, has now reached Purgatory and is awaiting the outcome of his Earthly actions. Stephen Adly Guirgis’s play imagines a courtroom drama where the likes of Mother Theresa and Sigmund Freud are called as witnesses in Judas’s trial. Was the betrayal justified? Can God forgive him?

Having fallen into despair, Judas (James Sugrue) lies catatonic while his defence attorney Fabiana Aziza Cunningham (Erica Nelson), an Irish-American with her own questionably sinful past, argues the case for his forgiveness. She’s fighting an uphill battle against a judge (Edgar Antonio Atienza) who’s already offside and a weasely prosecuting attorney Yusef Akbar Azziz Al-Nassar El Fayoumi (Hugo Schlanger) willing to bend the rules for a favourable witness statement. Surrounding the proceedings are other heavenly and not-so-heavenly bodies who participate in flashbacks, explanatory background information, and attempts to engage with Judas’s frozen form.

Guirgis’s script is intent on modernising this Biblical tale by injecting more urban elements like slang and swearing and a lot of mid-2000s brand misogyny, homophobia, and racism in the form of off-beat characterisations or jokes. Some of the characters including Saint Monica (Stephanie Reeves) and Pontius Pilate (Melinda Jensen) speak with distinctly African-American Vernacular English (AAVE) and Monica even has a rap solo. This unusual performance style saw great success in Hamilton, the 2015 Broadway smash hit, but in this context it is deeply uncomfortable to see white Australians appropriating the culture and mannerisms of another country’s minority group for laughs. Combined with El Fayoumi’s characterisation as an unrelenting sexual harasser who leers at any woman who enters the courtroom, it becomes very clear how outdated this script’s humour is.

Glen Hamilton’s direction searches out the nuance of the human characters and their frailty in the face of eternity and uncertainty. Nelson is heartfelt and believable as a wavering soul, unsure of the purpose of good and justice if God might not even exist and her questioning comes up against some complex philosophising in the course of the trial. In particular, Reeves is a strong Caiaphas the Elder who powerfully represents Jewish history and suffering and Nicole Florio offers a sharp and cruel Satan with an unstomachable apathy.

The pacing of the production relies heavily on the witnesses as they shift the atmosphere of the courtroom but it’s in the heated exchange between Satan and Cunningham that the production’s direction seems to slip into an unsophisticated yelling match. This throws off-balance the solemn tone of the final three scenes, an encounter between jury member Butch Honeywell (Mark J Wilson) and Judas and the final conversation between Judas and Jesus (David Hodgkins) before the former’s damnation. In this way, the intentions of the playwright and director feel at odds, both seeking to prioritise the concluding message in different scenes and coming to an unsatisfactory conclusion as a result.

There is something clever about adapting as story as old as Judas into a contemporary comedy but it’s not enough to rest on your laurels over 14 years of artistic and performance experimentation.