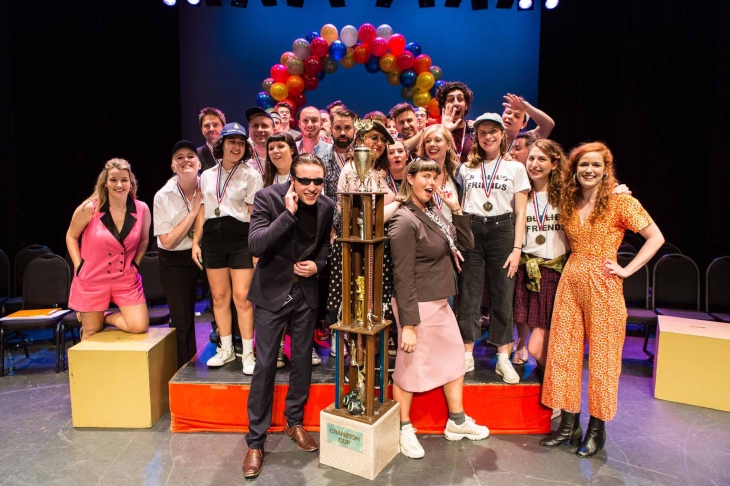 Like debating or mock United Nations, high schoolers across Australia are welcomed to compete in theatresports. Or, some late bloomers may come to the game later on at university or in adulthood as a way to build confidence, make friends, and learn how to make an audience laugh. In a nutshell, theatresports is competitive improvisation and the Cranston Cup is the championship of the game.

This year saw the youngest team to ever compete in the Cranston Cup, PG13, the Newington College intermediate theatresports champions along with six other teams of improvisers. The range of talents was wide from improvisation veterans like David Callan to professional improvisers and teachers like Juliet Rae Timmerman, Concetta Caristo, and Kate Coates, to stand-up comedians like Jacinta Gregory and Jeromaia Detto. The competition was tight.

Three judges determine the scores for each scene based on narrative and character development, technical skill, and the all-important entertainment factor. Joining the competitors on the stage were the time keeper Maddie Parker, musical improviser Tom Cardy and the host Bridie Connell. These three provide much-needed continuity and support to the unpredictable narratives each round of competition creates.

After three rounds, many challenges, a few coin flips, and plenty of hilarity, the newbies from Mission Improvable 3 took the Cranston Cup in a nail-biting points tally. The three University of Sydney students Jestika Chand, Rachael Colquhoun-Fairweather, and Elliot Ulm won the crowd over early with a scene about a penguin, a hunter, a walrus, and loyalty. Other scenes that led them to their victory included a wax museum proposal and throwing babies for inexplicable reasons. Even though this was their first time competing, they scored a rare 5-5-5 score from the judges, a perfect scene.

The Cranston Cup is a chance to celebrate something unusual, out of the box, and all around fun. Theatresports is a space for playing, failing, but ultimately trying and it’s always a joy to see children in the crowd who may be inspired to get up next year or try something as equally challenging as improvising. The huge range of ages and experience in this cup demonstrated the wide appeal of the competition and the inclusivity of the space Impro Australia has created.