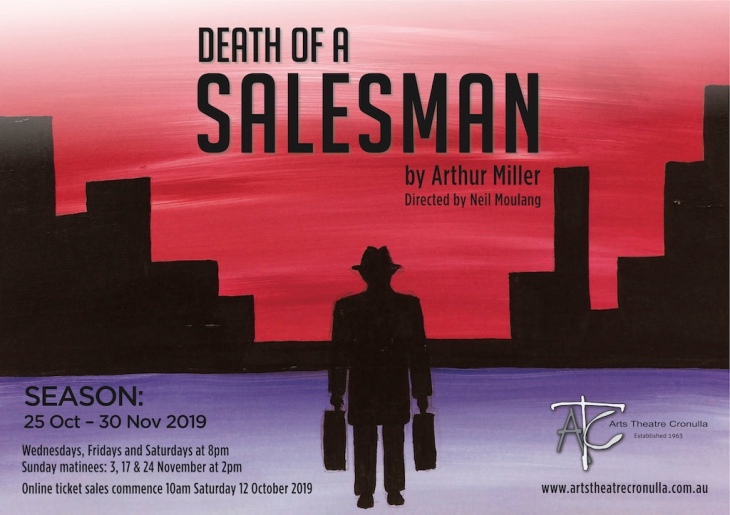 Willy Loman is reaching the end of his tether: his job isn’t getting any easier even as he approaches retirement age, neither of his promising sons has made a success of himself yet, and seeing the financial strain on his wife makes him sick. None of the grand plans Willy had for his life have come to fruition but that won’t stop his scheming. Arthur Miller’s classic play takes a hard look at the American dream and the masculinity and mediocrity that underpin it.

Biff (Matt Taylor) has returned home for odd-jobbing out west to find his family in both turmoil and denial. His father (Michael Gooley) is overworked and exhausted, fading out of reality into memories and hallucinations about the good ol’ days when anything seemed possible. His mother Linda (Liz Coote) is holding down the fort but could use some support from her wilfully ignorant son Happy (Hamish MacDonald). Miller’s script meanders through Willy’s mind between present day and overlapping voices or characters from key moments in his past, personal and professional mistakes, happy memories, and regrets, which intrude to muddle him up.

Director Neil Moulang focuses on the quiet horror of watching a man lose control of himself, finding dramatic tension in explosive misunderstandings and frustrations between the men of the family: Biff and Willy. Both are doing their best to find their place in the world and fulfil their understanding of manhood with the insufficient tools life has given them but they ultimately come to differing conclusions. Biff wants to accept himself and find meaningful satisfaction in simple things. He offers his father a lifeline but Willy can’t escape the magnetism of the great American dream that promises riches and happiness just out of reach. Moulang’s pacing is slower, shedding a sense of pressure or panic and instead using the production as a kind of incubator for a steady eruption.

The two actors have a fiery dynamic that aches with miscommunication and unmet needs. Taylor as the disappointing football star, a lost and wandering man is believable in his vulnerability and compassionate understanding of the many layers of guilt, shame, obligation, and uncertainty Biff has to wade through to get to his father. Gooley’s Willy is painfully pitiable even when swinging with rage and confusion. The depiction of his downfall and the insistence with which he clutches his pride and obstinance is well done.

Set design by Moulang was simple, spreading the storeys of the Loman household across the stage for more of a cramped Brooklyn apartment feeling than an old neighbourhood house. James Bruce’s lighting design was similarly simple but incorporated various states to capture shadowy nighttime or a classy restaurant. In Willy’s dream-like conversations with his property investor brother Ben (Bill Ayers), the lighting design created the appropriate ambiguous atmosphere to allow slipping between dream and memory seamlessly.

Death of a Salesman is a tragedy of twentieth century middle America full of misplaced hopes and a fierce, crippling pride.