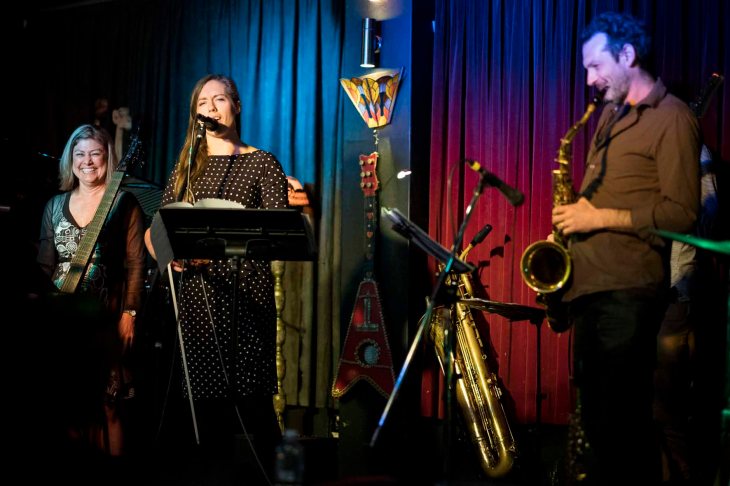 On a night of Sydney’s torrential autumn rain, Elysian Fields welcomed the audience into Foundry616 to launch their debut album What should I say. As Australia’s only band centred around an electric viola da gamba, Elysian Fields have a unique and eclectic sound blending influences from all over the world. The launch program included songs from the new album as well as some new and favourite pieces.

After opening with a cool jazz number titled “Cold Song”, the band played the four movements of Thomas Wyatt poems set to music. Susie Bishop provided the vocals that filled the little club and introduced a haunting melodic quality. These pieces worked to overlay influences of classic jazz with Matt Keegan on saxophone, Dave Goodman on drums, and Matt McMahon on piano with a sombre British tone that feels almost Victorian. Siebe Pogson on bass guitar and Jenny Eriksson on the electric viola da gamba deepen the band’s sound and support Bishop with the 16th century lyrics.

The next two pieces, which both appear on the album, “Southern Cross” and “Dark Dreaming” demonstrate Elysian Fields’s ambient song style where the instruments overlap and layer to create a large tonal landscape rather than a conventional song structure. Each instrument brings something unique to the overall sound and will occasionally peak through in a crystal clear solo like with the piano or saxophone.

Later pieces with Swedish folk origins further demonstrated the band’s style of taking jazz foundations and layering European strings effects to an eclectic and entirely original sound. A rendition of a Swedish “Peace on Earth” featured Bishop on vocals with the twinkling piano and swishing cymbals imitating the rainfall outside. The second Swiss number which has a history as a summer dance song for tying the maypole enlivened the program with a much more up-beat rhythm. This lead on to a much more animated second half of the concert with more originals from bass guitarist Siebe Pogson that got more than a few heads bopping in the room.

The program gave a wonderful overview of the style of Elysian Fields and their debut album What should I say. With incorporations of disparate influences and instruments, the band bring a unique and original sound to the classical music scene.

What should I say is currently available for purchase in physical form and digitally through iTunes. For more information, please visit Elysian Fields’s Twitter or Facebook.