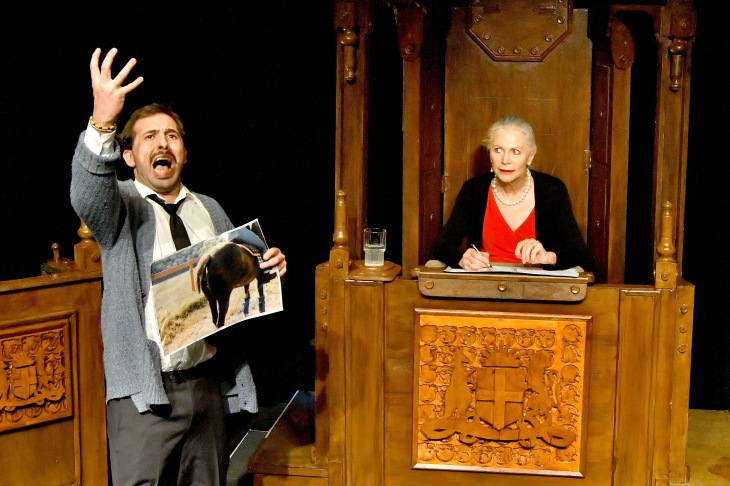 The legal profession is an opaque realm with notable barriers to entry and impenetrable jargon but popular culture genres like legal thrillers or legal dramas reveal a general interest in the world behind the courtroom. Bondi Legal exploits this interest in a comedy about the performativity and show-boating of lawyers.

Brad (Michael Arvithis) is a solicitor’s locum filling in while Frank (Valentino Arico) takes a long holiday. Brad doesn’t have a lot of experience so when a scheduling mishap requires Brad to represent Frances (Jadie Bastow) in a civil matter against a large chemical corporation, the two resort to extreme measures (ie hypnotism) to get the case over the line.

Tony Laumberg’s script centres around this single day in court and Brad’s journey of self-discovery with the help of Frances and her hippy-dippy methods of connecting to the universe and finding inner peace. The script demonstrates an astute knowledge of the law and attention to the details of procedure which grounds the production and adds weight to the dramatic stakes. Otherwise the comedy incorporates elements of slapstick, plenty of punning and insults, and silly caricatures to keep the humour rolling along nearly constantly.

Direction from Richard Cotter emphasises the extremes of physical humour in Brad’s self-conscious and fearful characterisation including clutching at tables and walls in disbelief and even going so far as pretending to be a gorilla at the height of stress. Arvithis does well to play-up Brad’s soppy professional demeanour without losing a sense of realism or authenticity. Other characters are similarly devised but with less emphasis on overstated movement from Frances’s new age alternative lifestyle to the defence solicitor’s (David Evan Samuels) uptight, bullying persona. Arico is a stand-out as a belligerent Frank but also as the witnesses spanning a simple veterinarian to a proud celebrity-esque equine dermatologist. Tricia Youlden also well represents the hard but even-handed position of the law as the all-seeing Magistrate.

Bondi Legal is a good-humoured story about the underdog finding his footing and the inner confidence he always possessed, set in a courtroom but just as easily conceptualised on a football field, in a classroom, or another everyday setting.