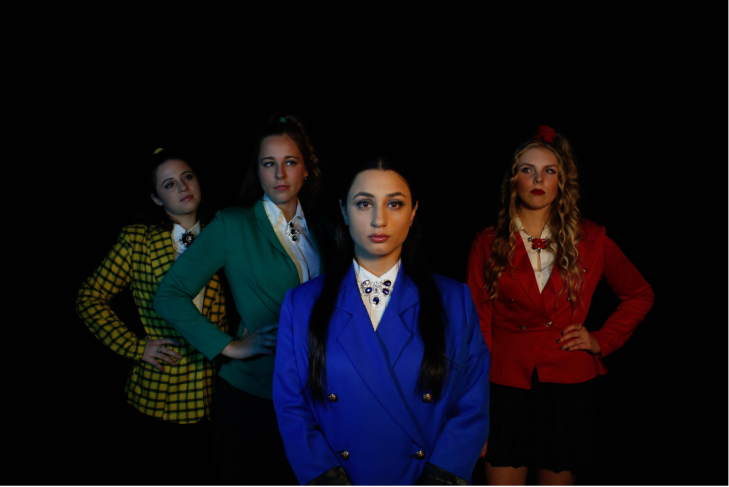 The cult 80s classic Heathers has recently been revived for television but this isn’t the first time the black comedy teen film had a resurgence. UTS Backstage brings the 2010 rendition of the script as a musical to the stage for a night of fluro, pep rallies, and crime.

Veronica (Artemis Alfonzetti) is your typical nobody until stars collide on the first day of senior year: she becomes valuable to the Heathers and moody man of mystery JD (Matt Hourigan) moves to town. What unfolds is a conventional high school drama of bullying, pettiness, and a hint of murder. Think of Carrie without the superpowers or Mean Girls with more blood. Her vampiric boyfriend hatches a plan to kill the most popular bullies in school as a revenge plot against bullies at large, dragging Veronica much further than she was ever willing to go.

The original film is a cult classic not because it’s a piece of genius but because it is much too much in every way. Both a parody of teen dramas and an extreme example of adults attempting to write for teens, the musical version maintains the offensiveness and cheesiness of the original only with added song breaks.

Before the action even began, the audience was ready for a good time thanks for the excellent band, lead by Jeremy Kindl as musical director, particularly the violinist Alex Paterson’s unique styling on some rock classics.

It is refreshing to see a cast so enthusiastically committed to the production. Especially the couples of Veronica and JD and Ram (Benjamin Legrand) and Kurt (Jasper Bruce). With songs saturated in cliche and cringe worthiness, the actors’ genuine enjoyment of their roles takes the edge off the characters’ obliviousness and their unbelievable plot. Hourigan mixes the dangerous nerdiness of the Matrix with every goth girl’s fantasy for the antithesis of the bumping, bumbling brawn of Bruce and Legrand’s jock aesthetic. Then there are the customary high school stereotypes of the geeks, stoners, preps, and ruling them all, the Heathers: Heather Chandler (Bec Milligan) the red queen, Heather Duke (Lucy Allen) the bridesmaid, and Heather McNamara (Alissa Del Vecchio) the other one. They sashay through their school hallways like powerful vixens, aspirations for one and all.

Alfonzetti balances her central role well and faithfully recalls painful teenage memories of choosing between what was right and what was easy. Granted, not everyone in the audience had to fake three of their peers’ suicides but everyone had at least one of those tricky moments growing up.

Other audience favourites were the parents of the group: Ms Fleming (Abigail Dixon) a washed-up hippy teacher with a thirst for the spotlight, and Jordan Barnes and Fred Pryce as Ram and Kurt’s dads who really did love their dead gay sons.

Kindl’s musical direction was commendable in finding harmony and consistency in an amateur ensemble cast. What really stood out was the choreography and direction from Natalie Cox and Gabrielle Rawlings who filled the large stage with just enough lockers to suit their needs. Physicality in a large, long space can be hard to control but it’s to their credit that none of the stage felt cluttered or conspicuously empty.

Heathers is a relic. This is not a production or script or story to be taken seriously. The musical version it a hyped-up misstep on the part of a room full of adults attempting to write like high schoolers. This is not how comedy is written now; it’s a style of black humour and “non-PC” jokes that was abandoned in the 1980s and hasn’t been missed. Heathers the Musical would be impossible to enjoy if it wasn’t so clear that this is a show to be laughed at, not laughed with. It’s not a choice of production that always works but perhaps a university production was exactly the atmosphere for an audience to blow-off steam with outrageous dick jokes and mean girls returned from the dead.

UTS Backstage chose their production and their team well. Plus, it clearly tapped into a greater audience need as seen in their nearly sold out run.