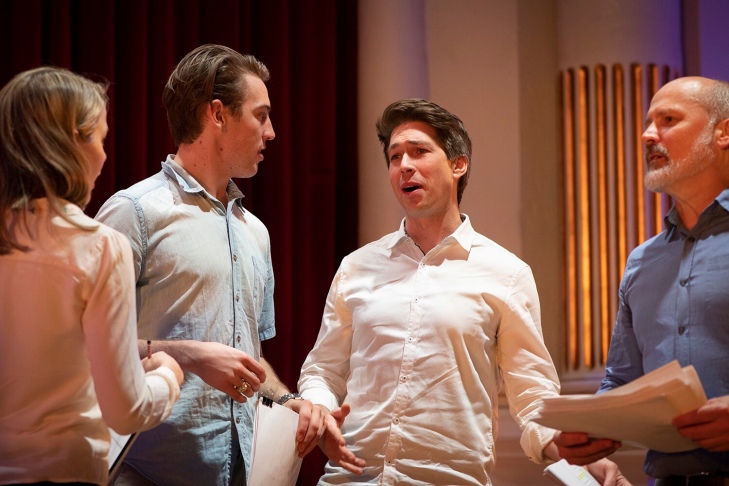 In celebration of the renaming and reopening of the Independent Theatre on September 2nd, 1939, the Seaborn, Broughton & Walford Foundation with Wenona School hosted a staged reading of the first play to walk the newly restored floorboards: French Without Tears by Terence Rattigan. The rich Sydney community of actors, directors, and audience members rallied for a nostalgic afternoon.

After a history as a vaudeville hall, the historic sight of the now Independent Theatre was purchased and restored by Dame Doris Fitton with hopes of opening a space for Australian actors to perform popular overseas productions and new national work. She was the artistic director of the theatre for nearly 40 years, after which the theatre again fell into disrepair before Dr Rodney Seaborn reopened it for a second time in 1998. Since then, the Independent Theatre has played host to countless productions as well as their popular concert series.

With the help of esteemed Sydney Director Aarne Neeme, the Independent was able to stage a celebratory reading of the first play produced in Doris Fitton’s time, French Without Tears. A farcical comedy set in a small seaside French town, the play is a cheerful homage to the many productions that followed it on the same stage.

A group of young men are thrown together in Miramar with the same goal of learning French from Monsieur Maingot (Terence Clarke) but the arrival of prestigious guests disrupts the many overlapping love stories and casts the group into chaos. Like all good farces, the web of interconnected relationships is hilariously complex and only leads to trouble: Kit (Robert Wells) is hopelessly in love with Diana (Kiara Teuila) while Jacqueline (Stacey Duckworth) is in love with him and Diana is secretly in love with Alan (Felix Gentle) but pursuing a more lucrative connection with Bill (Glenn Hazeldine). Kenneth (Antony Rodriguez) and Brian (Adam Edwards) are more straight-forward in their connections but they have opinions about love between men and women and they’re happy to stick their nose in when an opportunity arises. Written in 1936, Rattigan script bears all the hallmarks of vintage misogyny and xenophobia but with an underlying interest in the transaction of love and the overlap of affection and control.

The cast approach their reading with high spirits and commitment to the unbelievable circumstances of the production. Gentle presents a balanced provocative character with his cards held close to his chest; Hazeldine and Wells form an amusing rivalry between the naval codger and the bright, if naive, spark who eventually uncover their uncomfortable similarities; and the two love-interests in Teuila and Duckworth offer repeated quick wit and charm, especially when negotiating their battle terms.

The atmosphere of casual fun enveloped the afternoon with a group gathered to appreciate the love of theatre in Sydney and with warm recognition of the history stored in the Independent’s walls. There are few opportunities to revel within the lightening-paced turn around of contemporary theatre so such an occasion as an 80th anniversary is a welcome intermission.