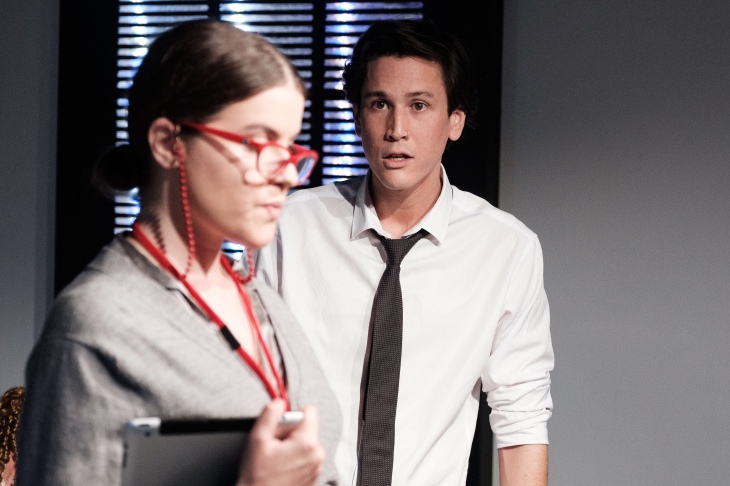 Joseph K has been arrested by an unknown entity for an unknown crime and, while it’s unclear what the consequences of his arrest may be, his identity is slowly being erased from all systems and databases. With the help of his sister and some unusual characters, Joseph hopes to fight the charges and get his life back on track. In Tom Basden’s adaptation of the Franz Kafka novel the Trial, the validity and efficacy of the modern world’s bureaucracy and impenetrable policies are satirised to the extreme.

Joseph (Danen Young) was in line for an exciting promotion at the bank before two volunteer arresting officers (Michael Brindley and Georgia Brindley) invade his house to inform him of his arrest. Joseph thinks nothing of this, assuming it’s a prank, until his bank cards, passport, Oyster card, shop loyalty cards, etc all stop working. With his sister’s (Elouise Eftos) insistence, he hires the doll collector and lawyer extraordinaire, Ian Hull (Tim Kemp). Over the course of a year, Joseph collides with all manner of bureaucratic walls and red tape that prevent him from deviating from the determined process of arrest and reveal stranger and stranger secret underworlds of which he had previously lived in blissful ignorance.

The original 1915 novel by Franz Kafka which was published posthumously in 1925, has been interpreted to represent the power of the government and other untouchable organisations in their ability to target individuals and deny their democratic and human rights. Basden’s adaptation maintains the air of threatening secrecy while shifting focus somewhat away from the omnipresent government to other over-policied systems like customer service and electronic education programs. At the same time, there’s a subtle winking towards deep state conspiracy theories that speaks directly to internet-era distrust of powerful politics.

Joseph’s first contact with the customer service team of the volunteer arresting officers (Phoebe Heath and James Smithers) is a hilarious satire of unusable services when Joseph is informed that there are only a select few things he can lodge complaints about. Heath excellently conveys the mixed attitude of chipper and bewildered when challenged about her service system which we feel assured would work perfectly well if one refrained from complaining about the wrong things.

The humour of this production is layered in Stoppard-esque punning and word play, miscommunication and deliberate tangentialising, and social satire from the one-on-one conversations to the individual v the institution atmosphere. Sean O’Riordan’s direction is sharp and excellently timed to milk the most from each scene’s absurdity. In the brief interlude scenes of radio announcers and podcast presenters, pacing was slowed with the use of staged performances when perhaps audio recordings would have more realistically conveyed the scenes, but this wasn’t detrimental to the production’s racing forward momentum.

Lighting design from Alex Holver with plenty of unusual colours and neon windows/wall panels combined with O’Riordan’s sound design comprised of dance remixes and contemporary rap made a concerted effort to separate this production from the early 20th century connotations of its inspiration. Joseph K is decidedly within the new millennium and associatively represents the systems of capitalism and democracy most relevant to contemporary audiences.

The performances in Joseph K are clean and consistent even as actors move between various characters. Heath is a stand-out as a teary customer service provider and an aggressively sexual legal intern. Eftos as Joseph’s sister Alison is proud and competent to a fault, clearly illuminating her brother’s insecurities and paranoia. Young, at the centre of the murky arrest process, is remarkably controlled in the balance between tension and explosion as his attempts to escape the process are foiled over and over again. The slow cracking of his cool confidence through minor irritations and errors is compelling and well done.

While watching these systems repeatedly fail this both ordinary and powerful white man, one can’t help but wonder how these experiences, mirrored from reality, would play out for people for whom the systems are not designed to advantage; the people who are routinely denied assistance, dignity, and humanity by our real policies and services. Through this lens, the “everyman” satire of Joseph K becomes painfully true to life.

Basden’s adaptation retains the sharp political criticism of Kafka’s novel while revolutionising its relevance to the modern audience while O’Riordan’s production adroitly deploys the humour of Joseph’s absurd circumstances. It’s a quick-witted, often laugh-out-loud satire of the state of our overly bureaucratic and automated world.