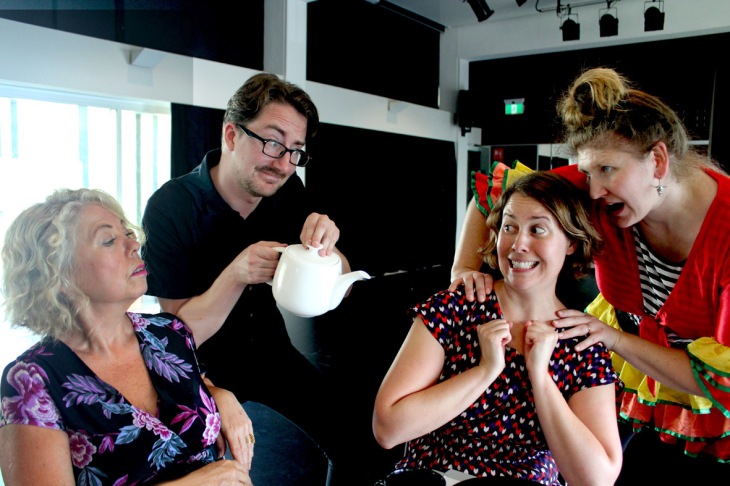 Sydney’s Short + Sweet Theatre Festival brings together groups of writers, directors, and performers to put on dozens of ten minute plays over eight weeks. Each of those weeks sees a selection of Wildcard plays and Top 80 plays compete for audience, judges, and crew votes to put their work through to the semi-finals and, eventually, the top of the Short + Sweet podium.

The Wildcard performances of week two were truly a wild bunch, covering a breadth of topics across advertising, pregnancy, sexual assault, death, and beyond. With only ten minutes to tell a story and maybe squeeze a laugh or two, everyone from the writer to director to the actors are under pressure to only bring the best bits to the stage. Some creative teams chose a simple set-up like Conversations on a Train where two train passengers (Kathryn Carroll and Troy Hester) eavesdrop on each others’ lives. While other stories were far more complicated like Quicksave by Sonia Allan which required a woman (Sonia Allan) to reset a conversation with her mother-in-law-to-be (Debra Freeman) about the potential for grandkids over and over again until they were drawn into physical combat.

These plays can be an opportunity to explore an unusual idea or to air something uncomfortable like the death of a loved one and all the necessary drudgeries involved. For the creative team of A Legal Debacle which saw the trial of a rape case lean in favour of the defendant, perhaps the ten minute time frame proves too small for the appropriate nuance.

Crowd favourite Happy Birthday about a futuristic world in which you can post-pone ageing for 50 years also took out the judges prize for this Wildcard round. The Wildcards are a great opportunity for experimentation and playfulness from new theatre-makers and veterans alike.

The meat of the Short + Sweet Theatre Festival program is the performances of the Top 80. These plays are also only ten minutes long and feature some equally absurd storylines. From a kindergarten teacher getting prepped for the new velociraptor student to three women competing over half-price running shoes, to a woman awaiting a kooky trial for an unknown crime. The tone of each play also ranged dramatically. In the Poisons of Pauline, an unassuming housewife (Bronwyn Beard) ends up poisoning her husband, mother-in-law (Mark Wallace), and lecherous solicitor (Jock Bidwell) in the height of melodrama. But the short play that really won the crowd over was Letting Billy by Diana Amsterdam featuring Ben O’Connell and Shantalle Abraham caught in difficulties of a star-crossed love affair.

The plays of the Top 80 were delightfully sophisticated in their delivery considering the constrictions of performance time and limited use of props, set, and lighting and sound design; not to mention the pressure of a jam-packed program and the overarching competition. Short + Sweet Theatre Festival shows itself to be a light-hearted way to stretch the theatre-making muscles for writers, directors, and performers alike and to present theatre audiences with a much wider variety of creatives in the Sydney theatre scene than those appearing on main stages.

At the end of week two, there are still six more weeks of Wildcard and Top 80 competition performances from February 6th – March 31st with the finals performances taking place April 3rd – 12th. For more information about all of the involved plays and their creatives, check out the Short + Sweet website.