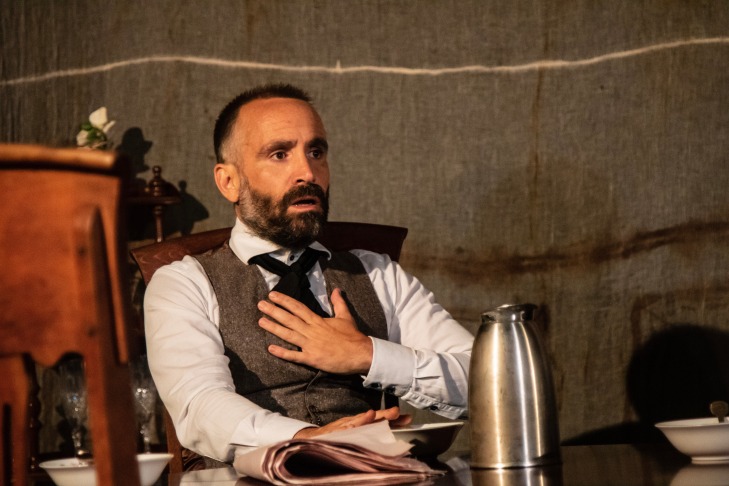 Metamorphosis was a seminal text from Franz Kafka, one of the most important writers of the 20th century. It depicts young Gregor, a son working to support his poor family, who wakes up one morning to discover he has become a cockroach. This production of the stage adaptation by David Farr and Gisli Orn Gardarsson shifts the dire and dreary tone of Kafka’s novella to something more dramatic.

Lucy McCullough’s set design combats the immediate concerns of portraying a story over a multi-storey house with semi-transparent, gauzy walls, stained with the footprints and scuff-marks of a man-sized cockroach but also the wear of poverty. The experimental sound and lighting design allowed manipulation of the simple two-room set with flashes and bangs to simulate isolation and alienation for the cockroach and fear from his family. Particularly the sound design, from Adam Jones, which incorporated sounds of a cockroach snuffling food and defecating, were well employed to increase feelings of disgust and distance from Gregor (Sam Glissan) as his cockroach self.

The problem of placing a man-sized cockroach on stage was solved with Luke D’Alessandro’s design of a steampunk-esque mask for Gregor to wear as he scurries around his room. The simplicity of a mask and reliance on the audience’s suspense of disbelief emphasises a key concern of this production: it doesn’t really matter what Gregor looks like, what matters is how his family treats him. The focus is not placed on the difference of the “other” so much as on the reaction of the dominant group.

Amanda Stephens Lee picked Metamorphosis as a story about difference and isolation that speaks to the deepening political and humanitarian divides opening up globally. When an argument against bigotry and dehumanisation is to imagine the “other” as a member of your own family, Metamorphosis illustrates the example, albeit in the extreme. Ultimately, though, Stephens Lee’s direction seems to muddle the message, elevating the humour of the text more so than its insights into humanity.

This production seems unsure of itself in the way it swings between modes. Gregor’s initial transformation is a serious and unexpected blow to the family who rely on his wages to survive. The arrival of Gregor’s boss Herr Stietl (Victoria Greiner) exaggerates the family’s position of poverty up against a cruel and heartless labour market. Alternatively, the family’s personal reactions to Gregor’s new form lean melodramatic from Hailey McQueen’s fainting fits as his mother to Yannick Lawry’s insuppressible anger as his father. Grete (Madeleine Miller) becomes the mediator but she isn’t without her melodramatic moments, using her brother’s loss of position within the family as a means to gain power and influence. The introduction of the final character, however, a co-worker of Grete and potential suitor, Herr Fischer (Julian Lawrence) turns the entire production into a farce. He becomes a form of stereotypical exaggeration to mock the middle class and his presence, while humorous, shifts the concern of the play considerably. Kafka used his literary worlds to illuminate and criticise political and social systems of his day, but the choice to retain those criticisms without an overarching tone in this adaptation was ill considered.

Where this production is at its strongest, the characters work as symbols of people caught in an unbelievable situation. The emptiness of their conviction combined with the passion of their hatred and disgust towards Gregor allows for easy mapping of real-life examples onto the family provided. Additionally, Glissan’s portrayal of a misunderstood cockroach, straight-faced to the point of denial about his situation is hilarious next to the violence of his family. It asks, which of these reactions is normal?

Stephen Lee’s Metamorphosis borrows from the reputation of the original novella as a small story that represents large ideas about belonging and our social structures. Within the sweet spot of the family giggling and grinning, nearly grimacing trying to forget their monstrous son in the room upstairs, this production is a funny means of questioning biases.