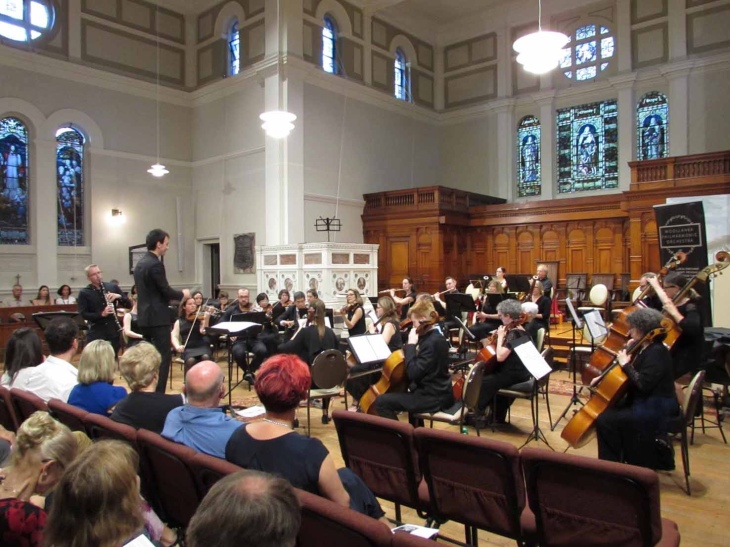 To close out their 2018 program, the Woollahra Philharmonic Orchestra decided to put a spotlight on some of their outstanding talents. The Spotlight concert comprised four concertos for four different instruments making for a varied and unusual mix of sounds and styles.

Opening the afternoon was a piece for trumpet composed by Hummel and played by soloist Timothy Neville. Neville’s playing is quick and energetic, skipping through long runs and trills. The strings provide a quiet but steady backing to the soloist, rounding out and grounding the brassy tone. At other times, the tinny sound of the trumpet blends surprisingly well with the rest of the orchestra and then stands on its own when necessary, as well. The trumpet doesn’t often get opportunities to shine in a non-military style so the audience appreciated Neville’s enthusiasm in his classical performance.

A standout performance came from violinist Rachael Kwa playing “The Lark Ascending” by Vaughan Williams. The piece was composed as a tribute to the beautiful sound of the lark’s song as well as a lament for the impossibility of replicating that beauty in human realms. Kwa made a valiant effort, however, to recreate the piercing, melancholic call of the lake bird. The clarity of her mournful playing at the top of the violin’s range plucked on one’s heartstrings. And, as she descended into deeper, more dramatic tones, the support of the orchestra filled the air. It was a captivating performance from a young player with very little time for preparation as explained by President Martin Cohen. A commendable use of the violin’s ache to blend awe and mourning.

After the interval, another rather unusual solo performance saw the harp take centre stage. The piece titled “Concertino for Harp and Strings” composed by Damase was dramatic and rather pounding in its falling tones. Like the villain backing tracks of a Disney movie or stage show, the dark, heavy tones of the strings bore down from behind the airier harp. Because of the softer, more delicate sound of the harp, much of Marjorie Maydwell’s playing was unaccompanied which allowed the resonance of each note appropriate attention. This manner of playing created a disconnect between the soloist and the surrounding orchestra, without the blending and building present in the previous pieces but also added to the drama by swapping tensions readily.

Finally, Mozart’s much loved “Clarinet Concerto” was performed by Julian Alder to everyone’s delight. This is a grand and dynamic piece which incorporates the whole range of the orchestra to strengthen and sometimes contradict the wandering of the clarinet. The clarinet has such a whimsical quality as it bounces through its melody, playful in its to-ing and fro-ing. The crescendo of the final movement felt enormous after much more reserved pieces from the other soloists but what a fitting way to finish a year of music for the Woollahra Philharmonic Orchestra.