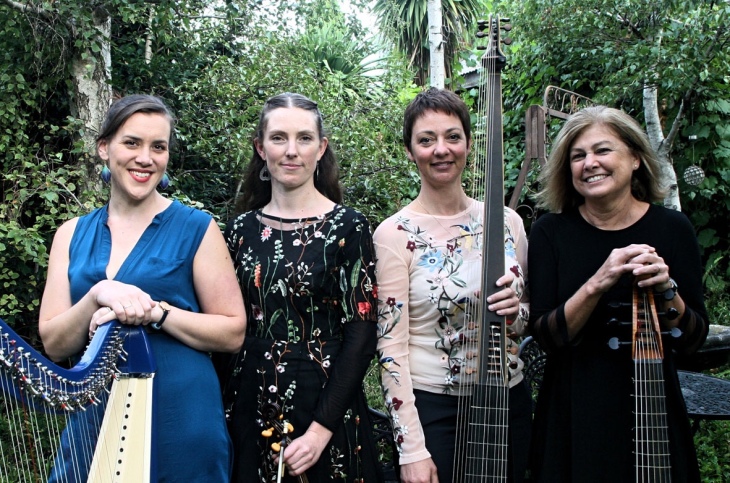 Closing their tour to launch their newest album titled Snow in Summer, Evergreen Ensemble played a concert of the same name at the Independent Theatre on a muggy Sunday afternoon. Playing a mix of Scottish and Scandinavian styles and songs with some Italian influence thrown in, the program meandered through melancholic Highland ballads and joyous dance numbers.

These multi-talented performers played a selection of pieces featured on the album and a few which went into the making of it but didn’t necessarily make the cut. Evergreen Ensemble is known for their interest and investment in the Baroque period and the folk songs coming out of Scotland during the same era.

The concert opened with some pieces from the above mentioned period in Scottish history which demonstrated the influence of Italian Baroque music on the Highland area, whether for better or worse. Shane Lestideau was on baroque violin with Samantha Cohen on theorbo, Jenny Eriksson on viola da gamba, and Claire Patti accompanying with her voice. All musicians displayed themselves beautifully on at least two instruments throughout the concert, which enabled their small quartet ensemble to feel like a much larger group.

Both Cohen and Eriksson, who play the theorbo and viola da gamba respectively, acknowledged the limited exposure many contemporary concert audiences would have to their unique instruments. This made for an opportunity to explain the history of their instruments, and their connection to both the Baroque period and Scotland, as well as demonstrating some solo pieces that showed off their instruments sound and capabilities. Eriksson shared Sonata XI by Lorenzo Bocchi who is credited with bringing the cello to Scotland, another connection between the two nations.

The versatility of the performers as they swapped instruments, as well as when the instruments veered between melancholic and celebratory seemingly after a pause, kept the concert lively and very original. Where Scottish music would typically be thought of as a completely different league from Scandinavian or Italian, Evergreen Ensemble proved their pieces had far more in common and were more complimentary than on first impression.

Stand-outs of the concert included two sonatas from James Oswald’s collection 96 Airs for the Seasons in which each sonatas is written after a piece of flora. Oswald is held as one of Scotland’s most successful composers who mixed the Italian Baroque influence with his own interest in his native Scottish land. “The Snap Dragon” and “The Snowdrop” were two sides of the same coin in their movement between dance and sorrowful reflection with whip quick violin from Lestideau and the deep groan of the viola da gamba.

To close, excluding their much deserved encore, the ensemble played a new piece commissioned from Alice Chance, an Australian composer. The commission fits into a larger project called The Australian Baroque Sonatas Project with the aim of promoting the use of period instruments in Australia. This piece, while by far the most contemporary, slipped easily into the repertoire of the ensemble as a representation of the tone and style of Baroque players. The violin and Patti’s Celtic harp seem to race each other around and around, getting faster and encouraging all listening to dance at the very least!

All the songs chosen by Evergreen Ensemble for their Snow in Summer launch tour was unique and full of life. The players blend their styles and instruments beautifully to represent their period and places of interest. It was a treat of a performance to see both unfamiliar ditties and instruments from another time brought confidently into 2018.