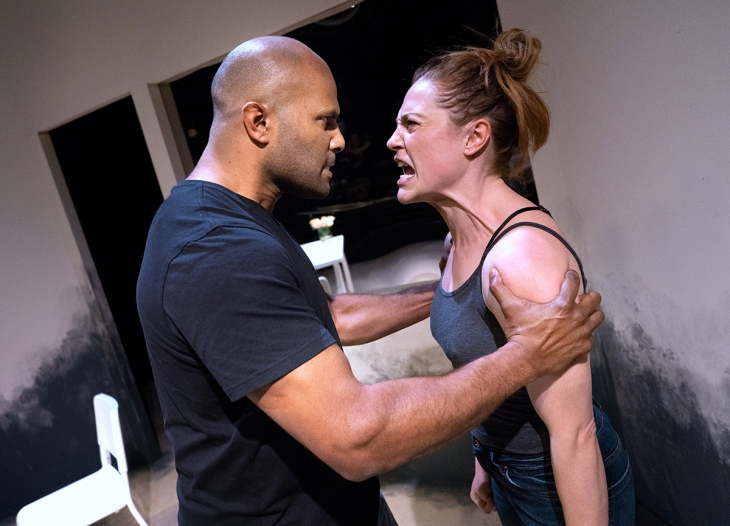 This year has seen a number of staged examinations of domestic violence and violence against women in time with the #MeToo movement and a global recognition of the violence and abuse faced by so many women. Steve Rodgers’s new work fragments his examination across four different stories. The unnamed cast trace three violent relationships from meeting to testifying and illustrate the often subtle ways power is abused to sometimes deadly ends.

Ella Scott-Lynch plays all the women in this show, starting as partner to Kire Tosevski, who plays a police interviewer and a men’s prison counsellor, and moving through various relationships with the other men in the play: co-worker and sexual assault survivor across from Christian Byers, wife and murderer of Ashley Hawkes, and wife and prisoner of Mick Bani. In each relationship, we watch as Scott-Lynch describes meeting her future abuser, how charming they were and how much fun they had together, and then eventually revealing how the men began exerting power and control over her, eventuating in violence and police charges. Sometimes it’s as simple as “preferring” their partners without makeup or not liking one of their friends, but the sinister entitlement underlying  each abusive relationship is there from the beginning.

This trajectory is familiar for anyone who closely follows the regular murders of women reported in Australia each week or for a large portion of the women who have experienced abuse and manipulation in their own personal relationships. Sometimes it can feel like preaching to the choir to watch another show tracing the same narrative with no conclusion, no solution. Rodgers’s new script, directed by Blazey Best, attempts a slightly different angle for recreating domestic violence on stage and trains the audience’s eye on questions of trustworthiness. Scott-Lynch repeats her feelings and justifications for her actions and experiences with each relationship over and over again, wondering how many people she will have to relive her story for. In Byers’s testimony against his assault victim, he accuses her of lying in the same way that Hawkes is portrayed as an up-right citizen in his custody hearing. It’s his word against hers and his reputation against hers and in almost every instance, he wins. Again, this is a familiar dynamic, but that doesn’t make it less compelling to see navigated and challenged on stage.

In a moment of particular disease, Scott-Lynch argues with husband Bani about not being able to spend time with her friends. She wants him to spend more time with them so they can get to know the side of him that she loves. This double-sidedness of abusers is one of the trickiest aspects of recognising them. Scott-Lynch knows she’s being controlled and is being affirmed by her friends, but she still holds out hope for her sunk-cost fallacy to hold true; for her abusive partner to reveal himself as the loving husband she wants him to be.

This vein continues in the most disturbing aspect of this production: the parallel between the charm of each future-abuser and the teaching Tosevski imparts on his young son, played by Wylie Best. When practising a short talk he’s written for school, Best is instructed to “disarm” his audience and quickly win them over. It’s subtle and innocuous in the context of a father teaching his son tips for public speaking, but in juxtaposition to three stories about men who wooed, lured, and then trapped women in violence and abusive situations and behaviours, to think a young boy is learning so early the power of his ability to charm and set people at ease is chilling. It speaks particularly to Byers’s storyline where he is funny and easy to watch even after the audience knows he sexually assaulted a woman. It calls to mind the way so many people defend abusers, claiming they’re such great people and they couldn’t imagine their friend treating someone badly. There is a definitely element of disguise and disarmament involved in abuse that is upsetting to watch instilled in someone so young.

Isabel Hudson’s set design is grim with greige walls and blackened doorways. It’s the cold and empty room in which Scott-Lynch repeats again and again her stories of abuse and violence. This room also doubles for three different family homes with a one-way mirror hiding a kitchen setting. But, even under a warm wash and promises of change, the mould is still creeping out of the floorboards and the violence is just out of sight.

The performances of these actors are difficult to watch knowing the fate they befall, especially for Scott-Lynch. You know these characters in the people they parallel from your co-workers and social circles and you might even have been one of them yourself. As the numbers of dead women mount each week on the news and on our Facebook feeds, it is so important to remind ourselves that they were people with lives and we must keep telling their stories.

King of Pigs is running at the Old Fitz Theatre from August 1st – September 1st.