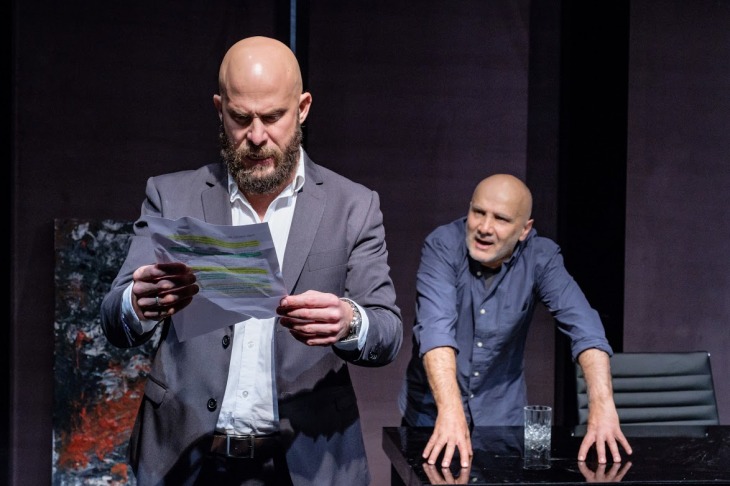 Miss Polkadot has won Children’s Album of the Year and producer Martin and manager Jim want to get a head-start on the celebrations of what will be the launch of a global franchise. Spirits are high, drugs, alcohol, and money are involved, but Miss Polkadot, or Cristobel, wants out. The reoccurrence of a traumatic ethical confrontation means Cristobel wants to walk away and start again, costing her management everything they’ve hoped for.

Permission to Spin is a characteristic corporate drama set in the children’s music industry. There’s nothing particularly new about this rendition of the money hungry, physically aggressive producer or the limp, pathetic manager trying to bridge the gap between his contracts and his unstable, unpredictable female star. The drugs, abuse, and humiliation are akin to what we imagine went on behind closed doors maybe 20 or 30 years ago when corruption was easier to sweep under the rug in Australia and people didn’t have mobile phones. In 2018, it’s really difficult to believe a man breaking his employee’s nose without anyone calling the police or at least leaving the room. The seedy underbelly of the corporate boardroom has its appeal but it seems outdated to write a new work where so little has changed from Ruben Guthrie. These characters have been done before, this conflict has been done before, and times have changed.

Writer, Mary Rachel Brown, has attempted an ethical twist in this contract dispute with the added dilemma of Miss Polkadot’s music being used to torture prisoners in Afghanistan and Guantanamo Bay. The photographs and evidence surfaced 14 years ago, at the very beginning of her career, and were duly buried by her management, allowing these past 14 years of success. Now, at the cusp of another surge of money and fame, Cristobel (Anna Houston) remembers these images and has another shock to her moral compass. She decides to threaten her producer (Yure Covich) into allowing her release from the Miss Polkadot contract and freedom from her association with international torture. As soon as it became clear that the plot of this production would include actual torture, the show’s tagline, “A black comedy for anyone who thinks children’s music is torture”, became instantly distasteful and inappropriate. To include instances of human rights violations and torture really served no end in this plot, especially when Cristobel confesses she really wants to pursue a career in another genre instead. Real torture that was reported on in the real world, and still goes on, was used as a shocking plot device by careless, selfish characters and proved a huge lack of awareness from the production team.

Similarly, the direction from both Mary Rachel Brown and Dino Dimitriadis seems either completely absent or wildly inconsistent. Cristobel and her manager Jim (Arky Michael) each have moments of rapid personal deterioration that come out of nowhere and throw the integrity of their characterisation to the wind. Each character, especially the men, maintain a high level of shout-talking throughout the production, which comes across as exhaustingly hyper-masculine and lacking nuance or growth. But most disappointingly, none of the characters are allowed to demonstrate genuine humanity and are instead exuberant caricatures of evil, powerful people, which means every moment of sympathy or distress goes to waste because the audience simply doesn’t care.

The marketing of this production would have you believe its a deep discussion about the ethics of art production and commercialisation as represented by the children’s music industry. But, really, this show is about selfish, cruel, careless individuals fighting each others’ egos through legal documentation. There is gratuitous drug use and violence, including two completely unnecessary instances of choking Cristobel, and ultimately boils down to a plot of two men trying to bully and gaslight a woman into making them more money. It’s a story out of touch with contemporary discourse and that is largely irrelevant in its argument and conclusion.

Permission to Spin is running at the Old Fitz Theatre from July 3rd – 28th.