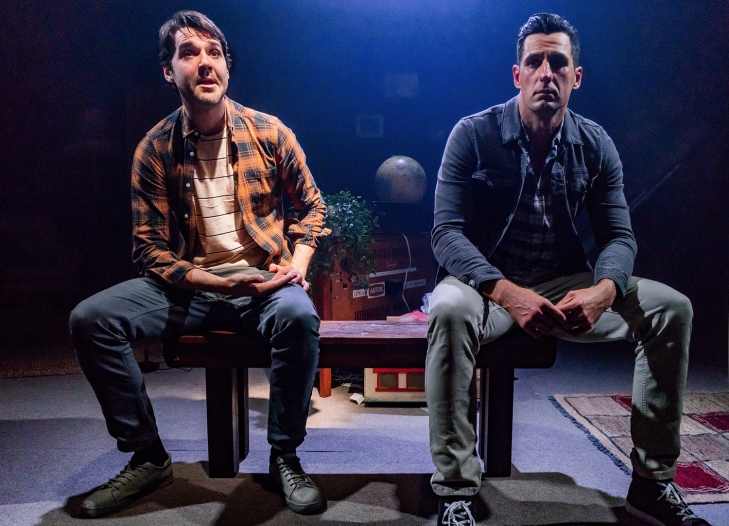 David once planned to kill a man. A man he hadn’t seen for a long time; a man he didn’t think he would ever see again. This man, the Bogeyman, raped David when he was seven years old and it’s time for revenge. Based on playwright David Holthouse’s own experiences and adapted with Markus Potter, Stalking the Bogeyman is a tense telling of trauma and the aftermath for a young boy and his future self.

Set across David’s childhood in Anchorage, Alaska and his adulthood in Denver, Colorado, the action is narrated by David (Graeme McRae) in retrospect to trace through his memories what happened, the consequences, and the events that led up to his revenge plot. McRae plays the character tenderly, not shying away from moments of vulnerability or fear but also not aggrandising his plan as a macho-masculine right. Something horrible happened to him and, now that everything has aligned, this is what he’s going to do about it.

Being a play about trauma, there isn’t a lot of introspection in the script with little to no time spent discussing victim v survivor or the mental scars trauma can leave on a person. David returns to key moments between his 7-year-old self and his 27-year-old self as a narrative of events rather than emotional or mental milestones, which isn’t to say the script is bare or lacks emotion, rather that it evolves and reveals subtly in David causing havoc at a sleepover or contemplating suicide or his drug addiction. It’s as though the script is making a marked distinction between ‘this is a story about what happened to me’ as opposed to ‘this is a story about me’.

The only person David speaks to about his rape is his drug dealer, Molly (Anne Tenney), in what is a disappointingly simplistic relationship. Molly is characterised exclusively as her own childhood sexual abuse and her drug dealing which is a surprising flattening for a show that also strives to depict another abuse survivor as more than that. As the only character with grounds to help David, her shortcomings in characterisation make the conversations and advice generic and meandering.

The rape occurs in the basement of David’s parents’ friends’ house and the choice to maintain Lauren Peters’s 1970s set design throughout the entire show was a powerful way to keep the narrative rooted in that moment. The scenes between David and the Bogeyman (Radek Jonak) in that basement are chilling with a quiet and violent tension that stays with you until you’ve left the theatre. Then, in the final moments of the productions, to return to the dynamic between David and the Bogeyman, now shifted and aged, is a coiled spring in the gut waiting for any release. That final confrontation is masterfully directed and performed with all the aggression, grief, fear, and hope of this trauma contained in the way these men look at each other.

This is a difficult story and a confronting production with a subtle approach to trauma and masculinity that I haven’t seen on a Sydney stage before.

Stalking the Bogeyman is playing at the Old Fitz Theatre from May 23rd – June 23rd.