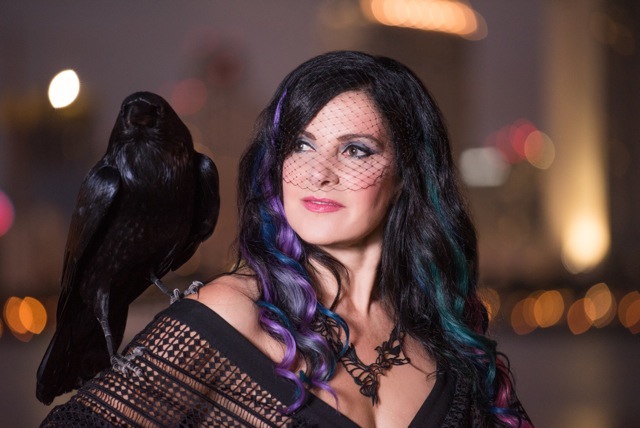 After over thirty years practising and teaching in the US, Concetta Antico has returned to her hometown Sydney to open a brand new gallery in Paddington. Displaying work for sale from across her career, the Concetta Antico Gallery marks a significant milestone for the artist to share her art with the world.

The main draw-card for Antico’s visual art is a unique genetic mutation that runs in her family and gives her an extra fourth colour receptor. With this extra receptor, Antico is able to see up to 100 million more colours than the average eye. Combining her superhuman sight with Impressionism’s influence, the artist has founded a new artistic movement called Tetrachromatism.

During the evening, Antico demonstrated her practice for attendees with a live painting of a galaxy scene, the subject of her most recent work exploring wider and more fantastical spaces. Later she explained that her painting practice is less about interpretation and more about recreating the world and its colours as she sees it. Additionally, she remarked on her ability to paint like a flowing series where each stroke follows on from the one before. Every painting Antico displays has been painted in a single sitting, a habit the artist describes as birthing the piece, imperfect but as she sees it.

While Antico painted, the gallery was filled with the scent of fresh oil paint that created an atmosphere of creation and movement, the artist at work. A duo of string players, Shaun Warden on violin and Kirsty Vickers on cello, played a selection of Baroque classics from the serene to the lively on traditional Baroque-style instruments.

The influence of Impressionists such as Monet and Sargent is certainly evident in Antico’s work with its prominent brushstrokes and unique colour combinations. The artist spoke at the opening about her preference for working outside and painting natural scenes of landscapes and birdlife. In this particular exhibition, she pays homage to her Australian roots with plenty of gumtrees, native flowers, and a cheeky kookaburra displayed.

At the same time, there is a definite appeal to the grandeur of the old world in the faithful restoration of the heritage listed building with ornate archways and ceiling roses that mimic the intricacy of the enormous gold frames within which most of the painting are shown. In more than one instance the vibrant, technicolour effect of the painting, including several versions of peacocks, which represent Antico’s pioneering colour technological style feels at odds with the traditional manner of presentation. Even down to the details of the gallery displaying antiques and vintage knick-knacks for sale argues for an attempt to ground this Tetrachromatism within an artistic history but instead establishes an odd tension of resistance.

Throughout the evening, the emphasis on the statistics of Antico’s work perhaps represents the insertion of scientific and technological consideration into her practice. The repeated reference of her 4 colour receptors that see 100 million more colours so she can paint each piece in 1 sitting and claim to have over 1000 paintings in collections all over the world become points of importance, pieces of evidence that plot the path of her career which has lead to the opening of the Concetta Antico Gallery, a lifetime achievement.

In terms of the work itself, Antico’s style favours static scenes of still-lifes or landscapes where the colours aren’t distracted by attempts at movement. However, the prioritising of her tetrachromacy and ability to paint in one sitting seems to devalue perspective, composition, and depth; things easily lost when one sits too closely with a piece. Stand-outs included a cloudy day in Centennial park, sweet stems of geranium, and a shining abalone shell.