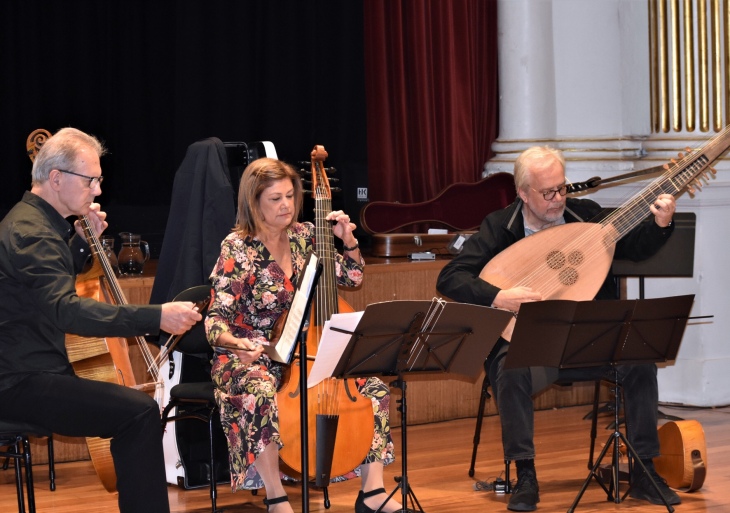 After founding the Marais Project in 2000, viola da gamba player Jennifer Eriksson is still leading the charge for the instrument as the only electric viola da gamba player in Australia as a member of Elysian Fields. This concert brings together the classical and contemporary tones of this unique instrument in celebration of the Marais Project’s 20th anniversary and the launch of their latest album.

Formed as a celebration of the music of the viola da gamba and inspired by the composer and viola da gamba player Marin Marais, the regular members of the Marias Project were joined by two special guests for the first half of the concert. Starting off in full force, the first piece “La Retour de la Paix” by Michel Pignolet de Monteclair, arranged for viola da gamba by Eriksson, was played by Cathy Upex and Eriksson on viola da gamba and joined by Leif Henrikson, Tommie Andersson on the lute, and Belinda Montgomery accompanying with her soprano voice. The three viola da gambas created a more lateral quality to the backing of the romantic folk tones of the lyrics and lute playing. Often plodding and repetitive, the string instruments frequently contrasted with Montgomery’s voice in a sinister dissonance before closing the piece with almost jig-like joviality.

Similarly, for the second piece Marin Marais’s “Suite in G Major for two viola da gambas and continuo”, the combination of unusual string instruments creates an unfamiliar but still wholesome sound. With Andersson swapping to the theorbo, the piece has an overall slower and more considered pace which builds in the second half but maintains a sense of elegance and reservation.

For the final piece from the Marais Project, the group was joined by Susie Bishop with violin and voice for a traditional Swedish folk song titled “In beautiful summer”, arranged here by Andersson. It was a treat of this concert for Swedish Henrikson to join Sydney-based Eriksson and Andersson and to play a folk song from their shared heritage. For a song named after a bright and happy season, this piece was unexpectedly slow and serious, especially in the heavy opening section from the theorbo. This piece, as well as a selection of other songs from the Marais Project, appears on their 20th anniversary album The Garden Party, which is now available for purchase on their website.

To round out the celebration of the viola da gamba, Eriksson’s jazz and classical fusion band Elysian Fields played a selection of songs from their repertoire, many of which featured in their album The Scandinavian Project, music from and inspired by Sweden and Norway, from 2018. Two longer, more atmospheric pieces titled “Cold Soul” by Matt Keegan and “The Tragedy/The Journey” by Siebe Pogson, demonstrated the group’s unique sound where the instruments layer influences across genres like jazz and classical but also spreading geographically across Scandinavia and the Celtic regions.

A stand-out piece was “The Garden Party”, which is the title track of the Marais Project’s new album but was originally written by Eriksson for Elysian Fields. The song opens dramatically with heavy drums from Dave Goodman and sensual strings from Bishop and Pogson on the bass guitar. The crystalline piano playing from Matt McMahon plays against the alternating breathy and bleating sound of Keegan on saxophone. While each instrument can be said to add its own unique touch to each piece from the group, it is Eriksson’s electric viola da gamba that sets the sound that much apart from other contemporary fusion groups.

As a combination-style concert, both groups clearly demonstrate a love of unusual instruments and sounds, particularly the viola da gamba, and their pairing in this program excellently showcases the range of possibilities in genre and tone for this celebrated instrument.