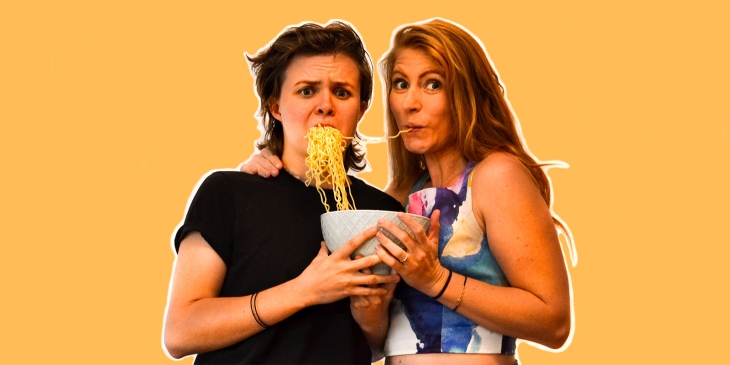 Cheap Noods is about growing up queer in Australia and still managing to turn out alright: happy and funny. Ally Cockrell and Kim Greaves are a couple who put together this show to show off their relationship and celebrate Aussie queerness.

As a relay-style cabaret-esque performance, Cockrell and Greaves trade-off stand-up bits, sketches, songs, and dancing. There are some slam poems, a Bob Katter impersonation, and an unexpected striptease to round out the evening. Many of the performances focus on being gay and the trial and tribulations faced by each performer in navigating social expectations while shaping their identities.

The premise is simple and the execution sweet. Cockrell and Greaves are charismatic performers who appear to really enjoy the show they’ve written. With the cheerful support of the audience, it feels like Ally and Kim have invited you into their living room and you’re among friends.

There was an overtone to this production of directly addressing the political climate as queer women, especially in regards to Greaves’s hometown in far-northern Queensland. For anyone with queer friends, or those involved in queer-friendly spaces, the experiences shared here aren’t surprising but rather sadly familiar. Greaves and Cockrell are adding their stories of alienation, confusion, and sadness to the collection of Australian queer lives on stage. But the mere act of performing a show on a Sydney stage with your same-sex partner and openly celebrating queerness for a paying audience, that is enough of a revolutionary act.

Cheap Noods develops an atmosphere of joy and camaraderie between performers and audience. It’s a friendly, fun show that is equally focused on the audience and performers enjoying themselves. You will leave feeling good.

Cheap Noods is running at the Factory Theatre on September 8th.